Go to the shopping mall, swipe your credit card, and transaction successful! The simplest thing in the entire world, right? Except not really.

From magstripes to near field communication, all these systems which we deem a regularity have a complicated process behind them, and not everyone has access to them. In our latest deep dive, we explore the past, present, and future of enabling transactions.

The year is 500 A.D. You are a simple Mayan farmer making your way through the hubbub of the marketplace to get to the local fishmonger. As you approach the stall you notice atop the main table a basket full to the brim with fresh inland catch. You immediately decide to buy the fish. However, you do not take out gold coins or a bar of silver. Instead you hand the stallholder cacao beans. The stallholder takes the payment and hands the basket to you. Transaction Successful!

Yes, if you were an Ancient Mayan your Hershey’s Bar would’ve been worth millions. Shocked? Baffled? Well, not as much as the Ancient Mayans would’ve been today. Instead of the good ol’ barter system, they would’ve been in awe at how we could now purchase anything with just the swipe of a card (include 7 rings lyrics) or the press of a button (well, actually multiple buttons).

Life today is complicated and we can partially blame technologies for that. From the humble system of plumbing to the all powerful microwave, these enabling technologies have made life quite “different” from what it was when you used to pay with chocolate. Guess we owe it to these technologies to get to know them better, so let us delve into a category of enabling technologies that make the world go round and round: love? Nah, money!

We start with explaining the technology which lays down the base for numerous other inventions which take out the hassle when it comes to financial transactions; Near Field Communication (NFC for short). Near Field Communication is basically a form of contactless communication between two devices such as smartphones or tablets. An example of NFC, the emperor of sending data before the invasion of Messenger: the bluetooth. When activated in both devices, bluetooth allows both of the users to share or transfer data between their devices as long as they stand within a specific radius (4cm to 5cm). NFC uses electromagnetic fields to transfer data and can be found in certain credit cards fitted with NFC chips. You stand within a certain radius next to the machine and you can transfer money from your credit card to the machine without contact. Applications like Google Pay and MasterCard also make use of NFC, allowing users multiple services such as money transfers between smartphones.

​Now that we’ve explored the science behind wireless transactions, we move on to the type of technologies you might encounter on your normal everyday trip to the shopping mall, starting with Payment Terminals, more simply put as Credit Card Machines. Payment Terminals are devices which interface credit cards to make electronic funds transfers. They consist of a keypad to type a PIN code in, a screen, a slit to swipe your credit card in and a network connection to confirm authorization. In short, if you were to contribute a magazine article to Payment Terminals the caption would most likely be “Swiping right before it was cool”.

Speaking of Tinder: when you make a new account on any social media app, or set up a new email address for another free trial on Netflix, you might’ve encountered a sort of test, as shown below: 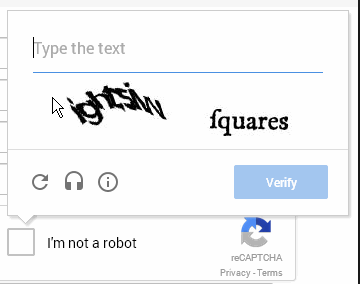 This is a CAPTCHA code, a type of turing test which was first introduced in 2003 to determine whether (you guessed it) the user is a robot or a human. For you, typing these random letters is easy enough. For a computer, it isn’t. Why would someone want to create a test to tell humans and computers apart? Well, there are some people who try to game the system and exploit a website’s weakness to their advantage. For instance, a website selling movie tickets might start receiving numerous requests from an automated program to buy tickets for a specific movie disrupting a very delicate and intricate system.

Let’s shift our focus back to payment methods and devices. We encounter yet another name for Payment Terminals: EFTPOS, which stands for Electronic Funds Transfer at Point Of Sale. As the name explains, EFTPOS is an electronic system to transfer payments at payment terminals through debit cards, credit cards (black cards if you’re Ariana Grande), etc. Moving on to other methods which help in reducing hassles at the checkout counter, we come to QR codes. Attesting to its name, Quick Response (or QR) codes are a promising method to reduce hassle. Traditionally used to link to websites as a promotional tool, QR codes can now also redirect consumers to transaction terminals to conduct their purchase with no physical tokens for payment (eg. credit cards) available. Each merchant would possess a different machine-readable QR code, which can be processed by applications with the device camera integrated. It is becoming more popular, with services such as Masterpass and BharatQR. Cryptocurrency users also benefit, for QR codes allow users to automatically input information that would otherwise be extremely lengthy, such as the merchant address.

Compared to QR codes, the chip-and-pin card is implemented on an arguably wider scale. The technology is present in our credit and debit cards, preventing fraudulent or imposter transactions. On a card with this technology, you might find a SIM-like pattern – it is actually a microchip that securely stores a Personal Identification Number (PIN), among other information. To validate a purchase, the consumer will have to correctly enter the 4/6-digit PIN stored on the chip. Also read: chip-and signature.

Going further back in the history of transactions, we encounter the magstripe (magnetic stripe) card. Stored on a band of magnetic iron, information on such a card can be read and validated through a reading head. Its prominence diminished towards the 60s due to the inability to change the information after being encoded on the card, as well as the ease with which charlatans can replicate an authentic card.

​Until now, we can see a clear distinction between different modes of transaction: those that require interaction with a material object (eg. credit card) and those that do not (such as QR codes). The latter group all can be classified as contactless payments, which require no physical proof of cards, but implement technologies such as RFID or Near-field Communication (NFC). Consumers would only have to purchase just through placing the device (such as a mobile phone) near the point of service (eg. the checkout counter) of the product being offered.

We can’t argue with the fact that the aforementioned technologies have impacted society in ways beyond measure. E-commerce has affected various sectors: communications, service, finance, retail, trade, etc. Relationships between organizations are redefined and transformed; all business-related activities can be accelerated. Electronic trading also provides an online platform, potentially expanding the market beyond existing margins.

We are now faced with an important decision: should we maintain the trading methods of the past, or should all cash be made “smart”? Unfortunately, the latter option isn’t as easy as it sounds. Not all of us are “self-made” billionaires like Kylie Jenner. Even more of us don’t have access to the modern financial system. Though these contactless payments have made it easier for most people to process transactions, we cannot say the same for poorer demographics. Poorer areas don’t have credit card readers; people still pay with physical cash. Technology is changing the world. However, its impacts are not maximized if people lack access to it.

One solution to the problem of people lacking access to these credit cards and contactless payment systems, would of course be the government or some form of governing state providing every vendor with credit card readers. This would of course have the benefits that have been previously mentioned such as providing online platforms, but is this really the best solution? Some other things it would provide is the governing state or the group that owns this payment system having huge amounts of control and influence over society, which can be seen as both a positive and negative thing. It could be seen as detrimental to society due to some people preferring privacy and autonomy over state knowledge, as a system of complete contactless payment would mean that the group that owns this method of payment having total access to all exchanges that take place. Some may believe that this is an infringement of basic rights such as privacy, which could create backlash against the government making all payment contactless. In the long term, this could lead to the state being accused of having an authoritarian rule and citizens could potentially feel that they deserve to have not all exchanges accessed by the government.

On the other hand, the government having access to all payments being made could be seen as a positive thing. This would likely reduce the rates of crime in the world of monetary exchanges, as whenever a party is being duped or scammed the owner of the payment system would become aware of this and could notify law enforcement. As well as this, theft rates would decrease as the governing party would now exactly which money belongs to which person, thus theoretically money cannot be stolen. Of course, there is always the risk of hackers breaking down security systems and stealing money, or even as extreme as adding money into everyone’s accounts so huge amounts of inflation happens and the currency becomes worth almost nothing, but we believe that this is always a risk whatever happens, and with a strong enough security system we should be able to mitigate or completely stop the effects of this.

The year is 2019. You are a regular person making your way through the hubbub of the shopping mall to the local Apple store. As you approach the store, you notice the latest iPhone XS standing proudly on a display. You immediately decide to buy it. However, you do not take our cacao beans or even regular cash. Instead, you simply touch your phone to the reader. Using Apple Pay, the manager takes the payment and hands your new phone to you. Transaction successful!