Ever been stuck between two people that speak a language you don’t? Often deemed an alternate “third-wheeling” experience, such is both confusing and, at times, painful.

In this deep dive, we explore “languages” that leave the majority of us bewildered, along with manuscripts and other documents that have yet to be understood. 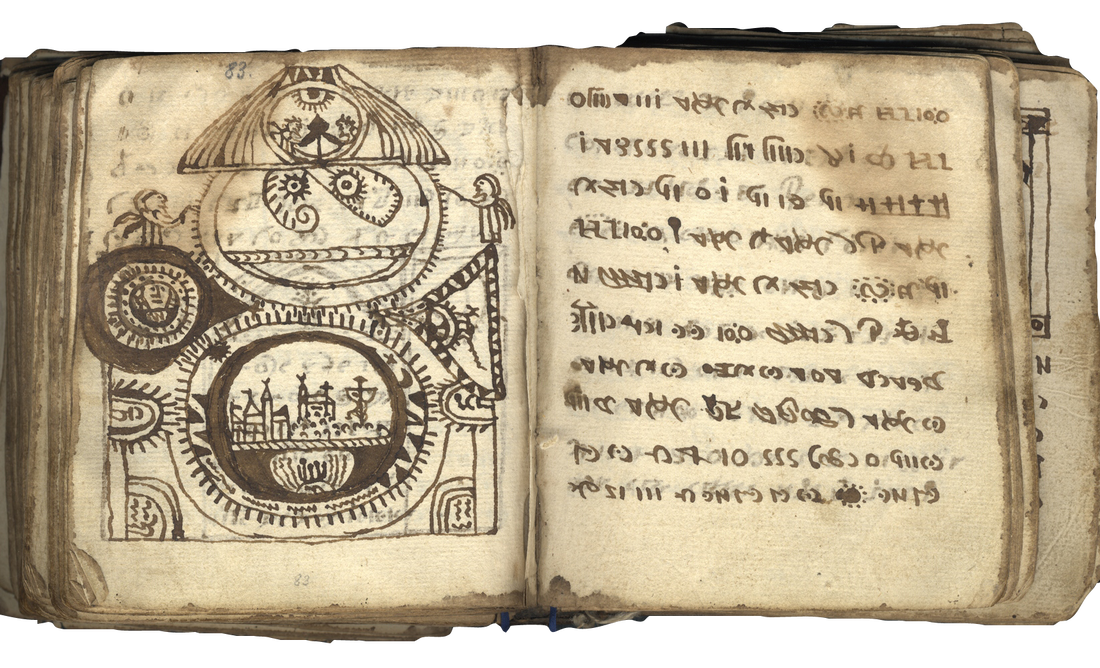 The Rohonc Codex (often spelled Rohonczi) is an illustrated manuscript book by an unknown author that was found in Hungary in the early 19th century. The origin and the meaning of the text and illustrations have been investigated by many scholars and amateurs with no definitive conclusion. Many Hungarian scholars believe that it is an 18th-century hoax. The mysterious book was kept in Rohonoc until 1838, when it was donated to the Hungarian Academy of Sciences by Gusztáv Batthyány. The writing may be Sumero-Hungarian, Daco-Romanian (part of the old Hungarian alphabet), or Brahmi-Hindi.

A strictly methodical (and successful) investigation of the symbols was first done in 1970 by Ottó Gyürk. He examined repeated sequences to find the direction of writing, with pages also ordered right-to-left, and identified numbers in the text. After careful investigation, he noted that the code is most likely read from right to left and top to bottom, also known as the RLTB method.

The Voynich Manuscript has been a subject of considerable controversy among researchers and historians. It is composed of 120 parchment folios (leaves), 18 of which is missing. With an extensive range of illustrations and an indecipherable script, the Manuscript is yet to be decoded, and its exact history remains elusive.

Although not definitively confirmed by any studies, the creation of the Voynich Manuscript was likely in the first half of the fifteenth century. Carbon-dating of certain folios consistently suggests that the script was written between 1404 and 1438. Other tests, including (1) the protein analysis of the calf skin used to make the parchments and the (2) studies on the inks and pigments of the Manuscript concurred with the conclusion above. Other opinions exist, too; American botanists Janick and Tucker argued that the script could not be created before 1492, citing the appearance of certain flora and fauna that characterizes the post-Columbian period.

Regarding the location of origin, many schools of thought also emerged. Among these are guesses ranging from the tentative, such as Yale researchers’ ‘Central Europe’ remark to a pinpointed location, including Verona, Italy (inferring from the appearance of crenellations common in northern Italy), Germany, or Puebla.

Read more: A website dedicated to the understanding and documentation of the mysterious script. 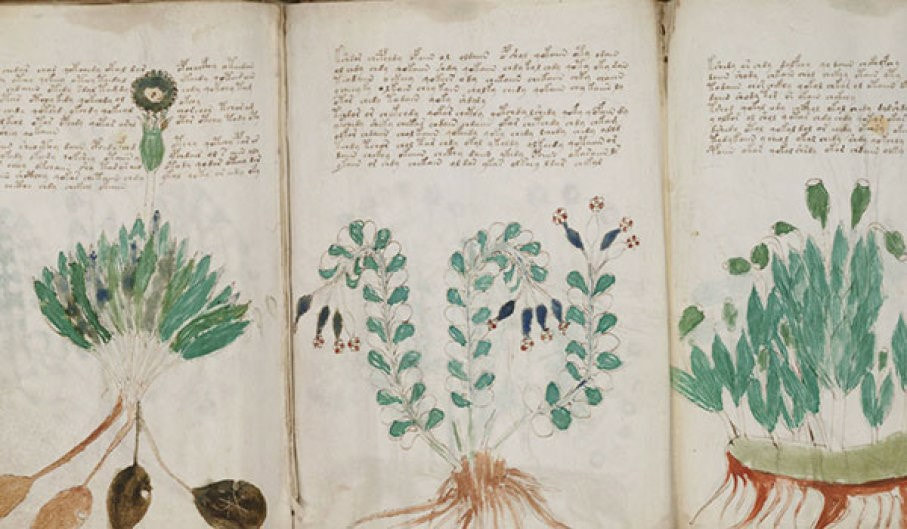 Currently, the ownership of the Manuscript belongs to the Beinecke Rare Book & Manuscript Library at Yale University in the United States - which also made a public, free digital copy of the Manuscript. It has had a long history with many different owners. Holy Roman Emperor Rudolf II might have been the first owner of this Manuscript, who allegedly purchased it from John Dee. This account was supported by the letter of Johannes Marcus Marci, who wrote to Georg Baresch. A few transfers later, in 1912, Polish-American scientist Wilfrid Voynich – the namesake of the Manuscript – purchased it from Jesuit College in Italy. He was adamant about solving the mystery of the Manuscript, as with the many prominent scientists that spent their efforts deciphering the ‘Voynichese language’. Despite having patterns similar to known languages, the Manuscript is yet to be meaningfully translated merely by replacing with Latin characters. More interestingly, a code was probably used on top of the language, complicating the search for an answer.

If the history of the Voynich Manuscript is intriguing and bizarre, its contents are equally as mind-boggling, perhaps even more. The writing in the Manuscript seems to be in an indecipherable language to which we aren’t familiar to yet. Apart from the writing, each page seems to be accompanied by drawings of unfamiliar herbs, astrological symbols and even bathing women; all drawn in washes of ink.

The drawings of the Voynich Manuscript can be divided into six basic categories: (1) Botanicals containing drawings of up to 113 unidentified plant species (2) Astrological drawings including astral charts, suns and moons and Zodiac symbols (3) A biological section with images of nude females with swollen abdomens bathing in various fluids with interconnecting pipelines (4) An array of nine cosmological medallions (5) Pharmaceutical drawings of medicinal herbs and roots (6)Continuous texts which seem to be recipes

Historians and cryptographers for years have been baffled by the mysterious text and the illustrations, giving rise to numerous theories one of which includes the fact that maybe the script was a hoax created by Voynich himself. However, history researcher, Nicholas Gibbs, believes that he’s cracked the code behind the elusive manuscript. Gibbs believes that maybe the manuscript is basically a guide to women’s health that’s mostly plagiarized from other guides of the era. After analyzing the code for a while, Gibbs realized that the words were medieval Latin abbreviations which he had seen in medical treatises for herbs. Read more on Gibb’s work here.

Kryptos, the Greek word for “hidden,” defines the CIA’s role as an intelligence agency. At their headquarters in Langley, Virginia, stands a sculpture with 4 huge copper plates. Unveiled on September 3rd, 1990 with the help of Ed Scheidt, the former Chairman of the CIA Cryptographic Center, the sculpture comes as a challenge to the most intelligent people in the USA. There are supposedly clues surrounding the Kryptos that help solve the puzzle, and while 3 of the 4 codes have been deciphered, the last remains a mystery. 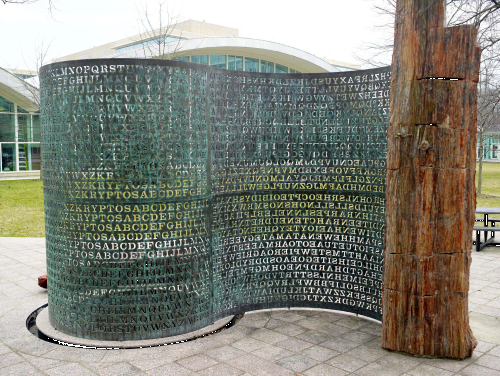 It was previously thought that William Webster, the CIA Director at the time the sculpture was revealed, also held the solution to the code. However, such a fact was later denied.

The first code is a simple one, meant for for cryptographers, and uses the Vigenere Cipher. It translates to a particularly poignant poetic phrase: “BETWEEN SUBTLE SHADING AND THE ABSENCE OF LIGHT LIES THE NUANCE OF IQLUSION” The misspelling of illusion is almost certainly intentional, as it supposedly reflects on how Sanborn admits when he makes mistakes.

The second code is tougher, but uses the same method of encryption. Its message, however, is a lot more interesting. It hints at something buried, and was corrected throughout the years

“IT WAS TOTALLY INVISIBLE HOWS THAT POSSIBLE ? THEY USED THE EARTHS MAGNETIC FIELD X THE INFORMATION WAS GATHERED AND TRANSMITTED UNDERGRUUND TO AN UNKNOWN LOCATION X DOES LANGLEY KNOW ABOUT THIS ? THEY SHOULD ITS BURIED OUT THERE SOMEWHERE X WHO KNOWS THE EXACT LOCATION ? ONLY WW THIS WAS HIS LAST MESSAGE X THIRTY EIGHT DEGREES FIFTY SEVEN MINUTES SIX POINT FIVE SECONDS NORTH SEVENTY SEVEN DEGREES EIGHT MINUTES FORTY FOUR SECONDS WEST X LAYER TWO”

The third code was cracked through the method of transposition and spelled out an extract from the diary of Howard Carter, particularly regarding the discovery of the tomb of King Tutankhamen. It reads:

“SLOWLY DESPARATLY SLOWLY THE REMAINS OF PASSAGE DEBRIS THAT ENCUMBERED THE LOWER PART OF THE DOORWAY WAS REMOVED WITH TREMBLING HANDS I MADE A TINY BREACH IN THE UPPER LEFT HAND CORNER AND THEN WIDENING THE HOLE A LITTLE I INSERTED THE CANDLE AND PEERED IN THE HOT AIR ESCAPING FROM THE CHAMBER CAUSED THE FLAME TO FLICKER BUT PRESENTLY DETAILS OF THE ROOM WITHIN EMERGED FROM THE MIST X CAN YOU SEE ANYTHING Q ?”

The fourth and final code is still to be discovered, and the most recent clue explains that the last two words of the code spell ‘Berlin Clock’, referencing the ‘Mengenlehreuhr’, the first public clock in the world.

However, it is also shrouded in mystery, as its designer - Dieter Binninger - mysteriously died in 1991, uncomfortably close to the unveiling of Kryptos.